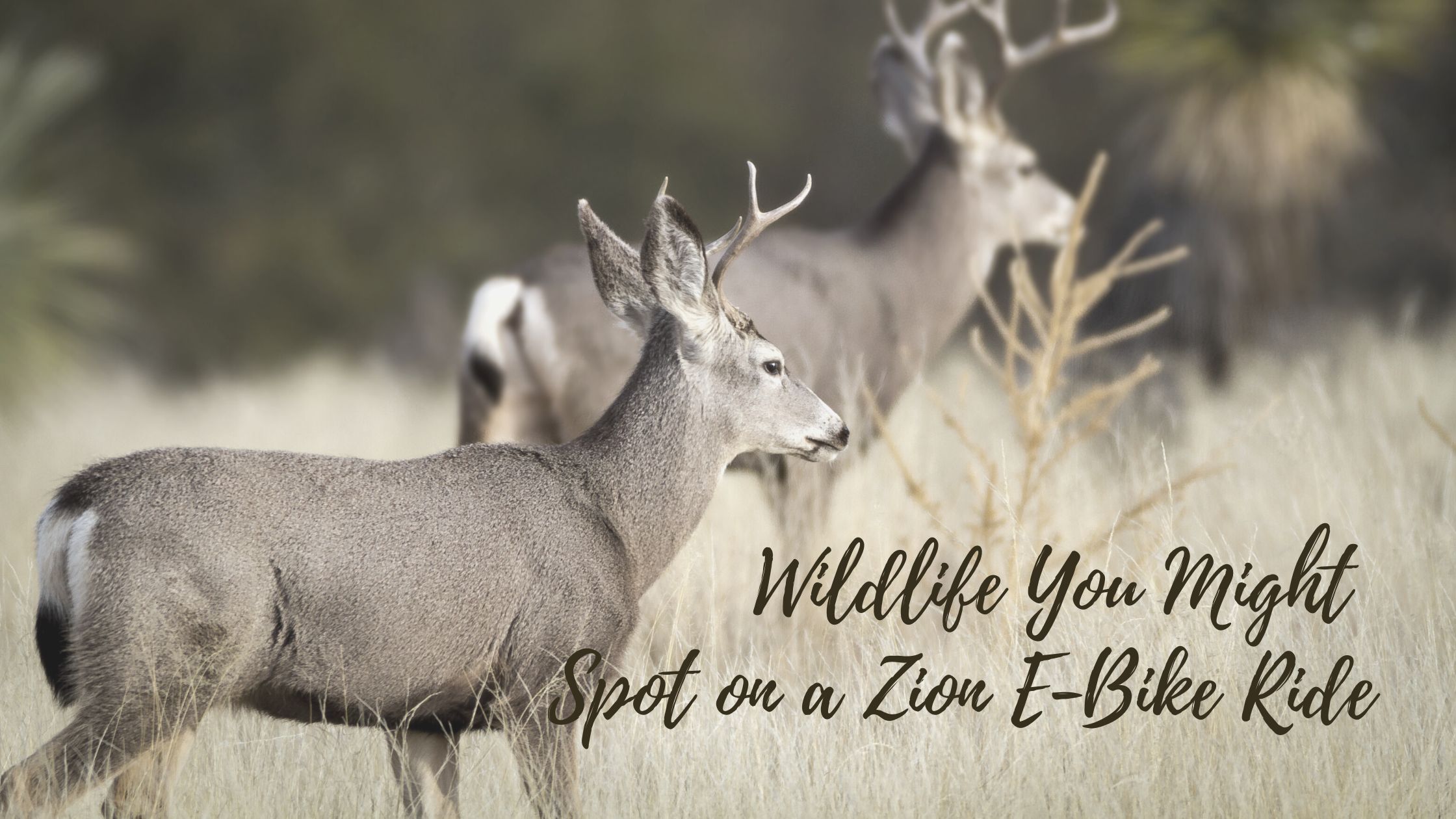 Wildlife You Might Spot on a Zion E-Bike Ride

One of the best places for a Zion e-bike ride is Pa’rus Trail. Pa’rus means “bubbling water” in Paiute. The trail is aptly named, as it winds its way along the Virgin River as it carves through Zion’s Lower Canyon. It is 3.5-miles one-way and is paved and flat. It is the only trail in the park to welcome bikes and e-bikes.

Pa’rus Trail is the perfect spot to enjoy an e-bike ride through Zion while taking in the park’s famous formations. It’s also a great spot to watch for wildlife. Much of Southern Utah is covered in sparse desert landscapes. But Zion is unique. The park is located on the Utah Plateau, making it a habitat for many plants and animals.

As a result, the park is home to a variety of unique and beautiful species. Many of them have been spotted on Pa’rus Trail. Ready to start planning your next Greater Zion E-Bike adventure in Zion National Park? Keep reading to learn about some of the animals you could spot on your ride.

One of the most common animals you might spot in Zion is mule deer. Mule deer are frequently found in grassy areas in Zion’s Lower Canyon. They are especially common near the Zion Lodge and along the Virgin River. Visit during the cool early mornings or evenings, and you’ll almost certainly spot a few mule deer during your ride.

Mule deer are uniquely adapted to thrive in Zion’s rough terrain. They have hooves split into two toes with a central toe separating them from each other. This allows them to walk across snow without sinking too deeply into it or slipping on steep slopes in the park when they get wet (which can frequently happen in Utah, especially during the winter and spring seasons!).

While cruising along the Virgin River, take a moment to look up. You may see the Peregrine falcon, the fastest animal on earth. These magnificent birds have been known to reach speeds of over 200 mph when diving for prey, and they can even catch other birds in mid-air. Because they hunt by diving, they usually build their nests anywhere from 25 to 1,300 feet above the ground, in crevices on rock faces.

Peregrines are found throughout Zion National Park. But just a few decades ago, this wasn’t the case. Peregrine falcons nearly went extinct in the 1970s, thanks to a pesticide called DDT that threatened their numbers. At one time, the population of Peregrine falcons dropped to just 39 in the lower 48 states. Today, National Park staff monitor between 8 and 10 nesting pairs each Spring, though more likely reside in and around the park.

Another conservation success story that you might spot during your ride is the California condor. California condors are the largest birds in North America, with a wingspan of 9.5 feet and an average weight of 14 pounds.

These birds are vultures and scavengers. They eat mostly carrion, though they occasionally kill small mammals like rabbits or squirrels.

The California condor is critically endangered. The species officially went extinct in the wild in 1982, when the only known wild California condors, which numbered just 22, were captured and placed in a breeding program. The program was a success, and researchers began releasing condors back into the wild in 1992. Today, just over 100 California condors live in Arizona and Utah, with many living near Zion National Park.

Another common sight throughout Zion is the rock squirrel. These small mammals are usually between 17 and 21 inches long when fully grown, with a long tail that’s nearly as long as their bodies. Their fur is a gray-brown color, which helps them to blend in with the landscape.

Rock squirrels are a common sight on many trails in the park, and particularly on Riverside Trail. But you may spot them on Pa’rus Trail as well. While these animals might look cute and friendly, and may even approach you, it’s important to keep your distance and never feed them — they’ve been known to bite guests who try to give them food!

This may not be an animal that you hope to see during your visit. But if you plan to do any hiking, there is always a chance that you’ll come across a Western rattlesnake. One of the more common snakes in the park, the Western rattlesnake is relatively small, about 2 feet long, and with a maximum weight of about 6 pounds. They have three different color varieties: gray/brown with dark brown blotches, red/yellow with dark brown spots, and pinkish-white with dark brown marks.

The Western Rattlesnake can be found in moist and dry habitats from sea level to around 8,000 feet above sea level. They prefer  rocky areas like cliffs or talus slopes (rockslides) but will also live in woodlands and desert shrublands if enough moisture is available for its diet of lizards, mice, and birds and insects such as grasshoppers.

The Western rattlesnake isn’t poisonous. However, its relative, the Great Basin rattlesnake, is. Luckily, rattlesnakes are unlikely to attack if unprovoked. If you spot one on the trail, back away slowly and keep your distance, and they’ll likely go about their way.

Watching for wildlife and taking in stunning views are a must during your e-bike ride on Pa’rus Trail.